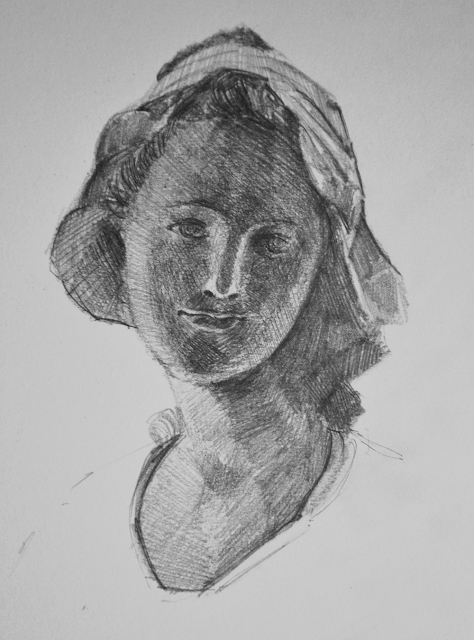 did this yesterday eveing and it was pretty low lit and was almost not visible in real life ( dranw from the sculpture placed near window sill. I sort of hate taking pictures from camera will scan and update this and the flash kinda bleaches or what not the tone......I think thers some wrid crap happening to the neck..as pointed out by M.Powell
Posted by Sarankan at 11:51 No comments: 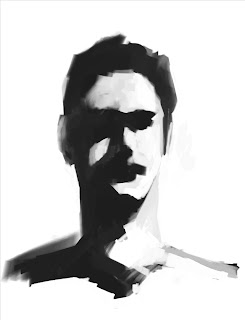 black and white sketches
Posted by Sarankan at 15:04 No comments: 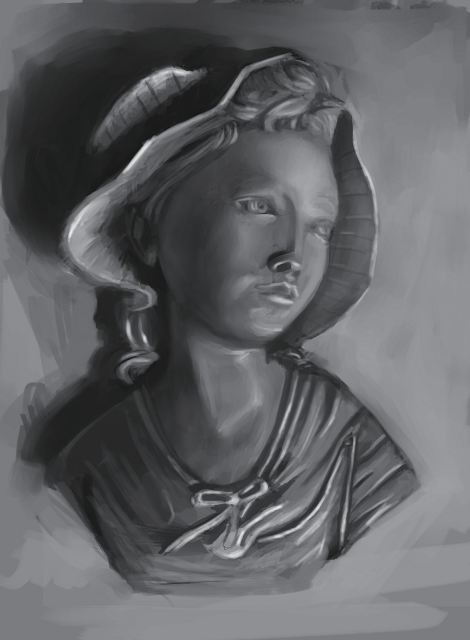 another speed paint from life ..this was quite different to my normal speed and i wasn't as consistent as i could have been. Its okish for a speed but ideally i would have liked to have refined it a little more and the sculpture itself has a slight stylised element to the face.
Posted by Sarankan at 13:15 No comments: 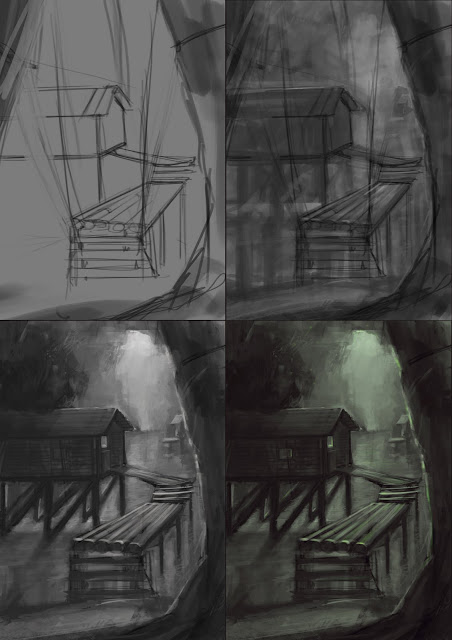 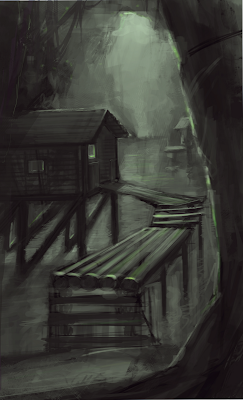 Just a quick sketch done this morning. i sketched this roughly in paper and will upload that as soon as i get to a scanner. P.S I know I havent uploaded anything for a while but lately been working on sketchbooks and doing 3d so once i finish some of teh 3d stuff and get the 2d scanned i'll post them in the appropriate dates.
Posted by Sarankan at 13:45 No comments: 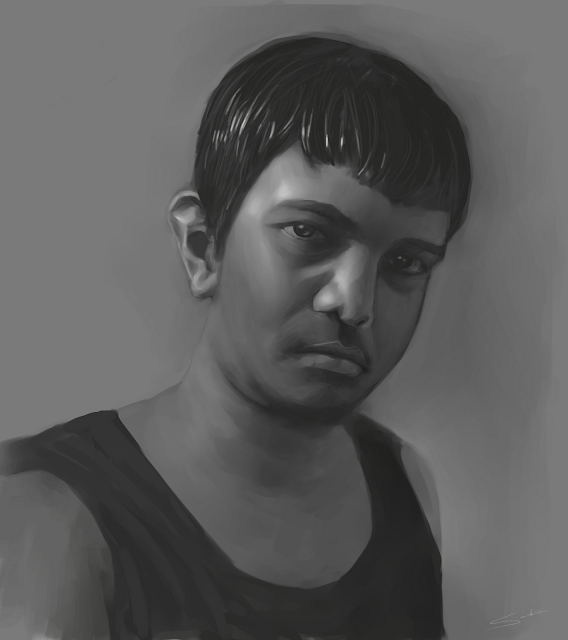 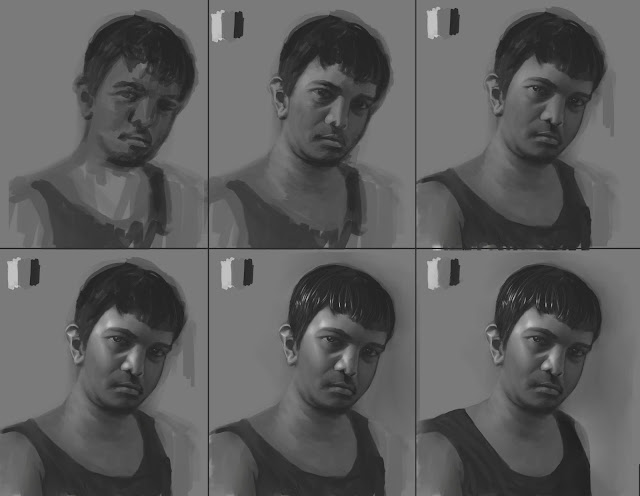 yet another speed paint 1 hr and 20 mins did yesterday

Posted by Sarankan at 19:12 No comments: 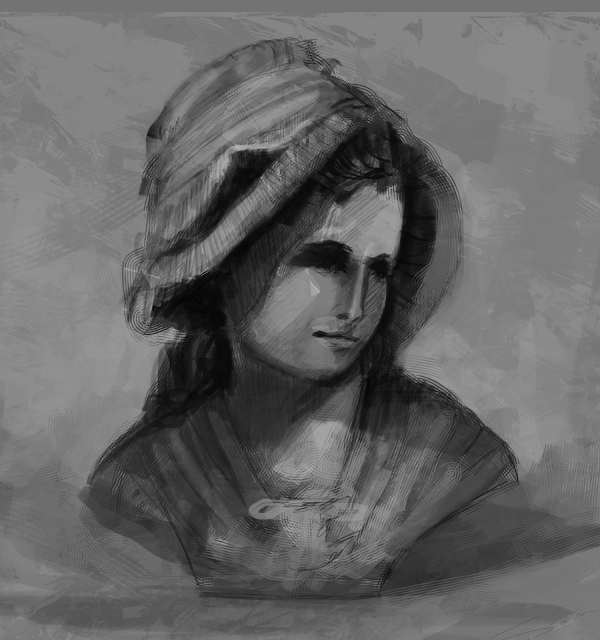 past few day I have been doing some modelling so to balance stuff out started doing some more 2d and this is actually from a physical sculpture my dad had which i used a lot in art foundation 2 years ago and its 1 of 2 and i wanted to practice and improve drawing skills by setting up different lighting scenarios each day  and do relatively quick value studies of it. I think i also want to do a more completely rendered version too.
Posted by Sarankan at 14:04 No comments:

Posted by Sarankan at 11:11 No comments: 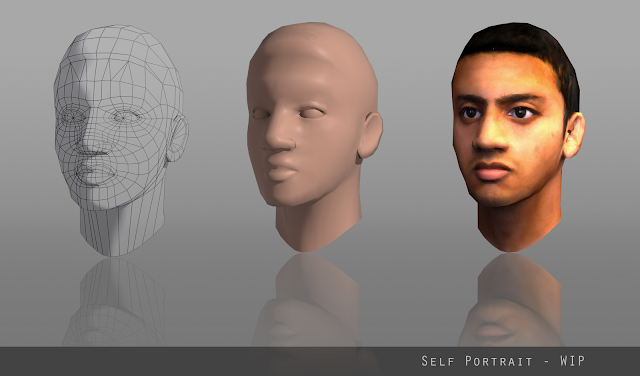 Self Portrait wip - a different topology to last time, I didnt spend too long tweaking. Only has a diffuse. The topology needs a lot of tweaking but I'm trying to make up for the lost time from last week.

I think this could be a lot better if I had customized/modelled the other half instead of using symmetry because my face is definitely not symmetrical.

ok its been almost a week since the last post.......Im freaking out ( mostly depressed) ...well what had happened was that I thought I'll try rigging that aviator and its taken me a week and guess what its not even done! I really don't want to waste any more time and rather get some modelling done. Its not that I don't know how to do it; its just extremely time consuming and tedious for me: in fact uving seems a hundred times more fun compared to this.
Posted by Sarankan at 00:20 No comments: 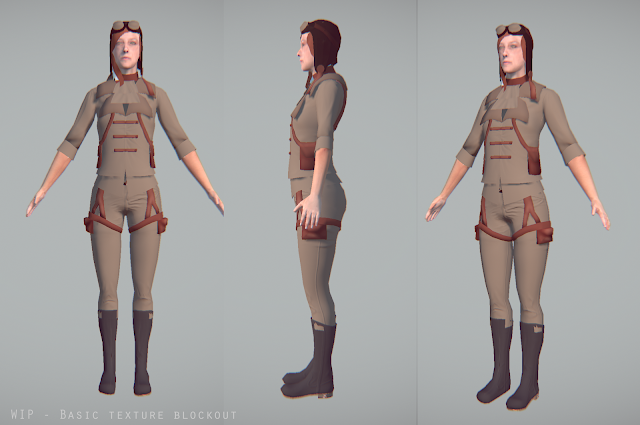 Ok. first of all this took a lot longer than I thought because this was supposed to have been done almost 4/5 days ago but somehow I have tore apart from the sculpting detail syndrome and started doing a texture blockout! The reason it took this long was pretty much because of Mudbox, I basically decided to sculpt some fine detail here and there but  got carried away and the result looks like some 1 hour speed detailing at the very most.

This is something almost everyone suggests and students including me feel the need to indulge oneself in, yes you've guessed it! It is the need to sculpt detail on every damn organic character or the just anything. The best part is how ironic the whole situation really is because tools like zbrush and mudbox are supposed to speed up the workflow and almost eight to nine times out of ten that's the critical step that slows most students down, (i say most students but mostly me).
Now i wonder why its such a big deal to feel the need to put every charcter in and out of zbrush? I think that my initial response would be that because its something that is widely used by industry professionals and students see the results from these professionals and their incredible sculpts and they anticipate the sculpting process like sweets before even the design is finalized. Let me demonstrate a classic scenario, teacher says " Make a next gen cave explorer" right about now student is thinking of concepts and visualising the character and since the words next gen was mentioned he or she is already having a possible domino effect game-art syndrome.

Making of this character = first he/she's modelling the basic block out of the character and now i must add a lot of detail? how? Zbrush!....and thinks in his mind " I know i have not done the full concept idea yet but lets forget that and jump on to the sculpting process in zbrush because I somehow believe that in zbrush I will find my answers.......eventually"

I know I did not digress as blatantly as that but rather got over zealous with adding detail. Despite the fact that I was using reference this time I was tweaking things such as clothing folds for too long and in the end i ended up scrapping a lot of the sculpted details and of course wasted time with this process.

However when I finally got the maps out and saw some of the results 5 days later, it was slightly satisfying but wondered why I spent all that time? I think it was good that I went through this process now rather than in the middle of uni attempting my mortal engine character. This could have been avoided by having a time restriction because i knew that I can get a block out and uv's done within a day assuming that I have a concept and the texturing done in a day if i REALLY pushed. The fact that i have not attempted sculpting in the middle of the workflow slowed things down because sculpting like painting is an obvious artistic process ( i know modelling is aswell but some people disagree) so its a lot easier to get carried away and waste time. I think this whole digression could be avoided by setting a realistic time limit, follow the concept and try not to make new stuff up just because you can (obvious i know) and finally avoid revisiting areas.
Posted by Sarankan at 21:02 4 comments: 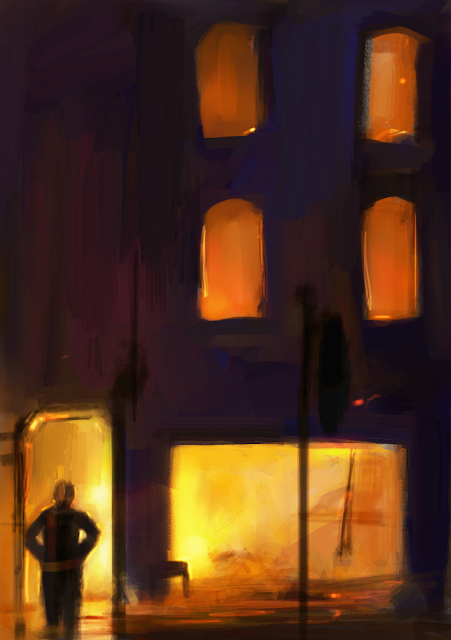 last few days been busy due to frinds birthday and had an eye issue so didnt make as much progress on my character project but going to put some long hours to make up for the lost time. I did a few speed paints on the current situation in London hope everyone's safe! 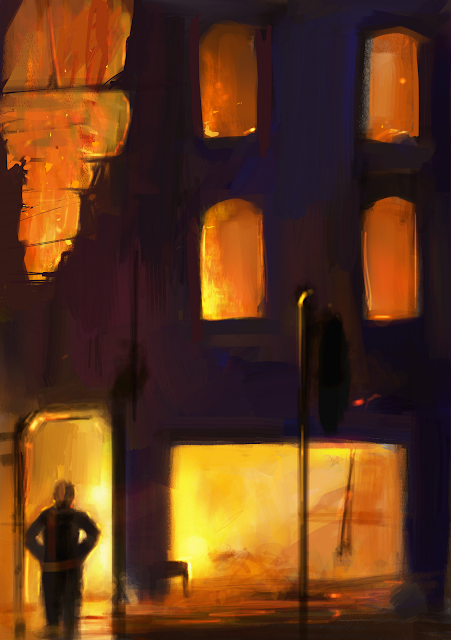 i thought ill break this up on the left too but was very indecisive to break that area cause a part of me wanted to keep that area intact
Posted by Sarankan at 14:03 No comments: 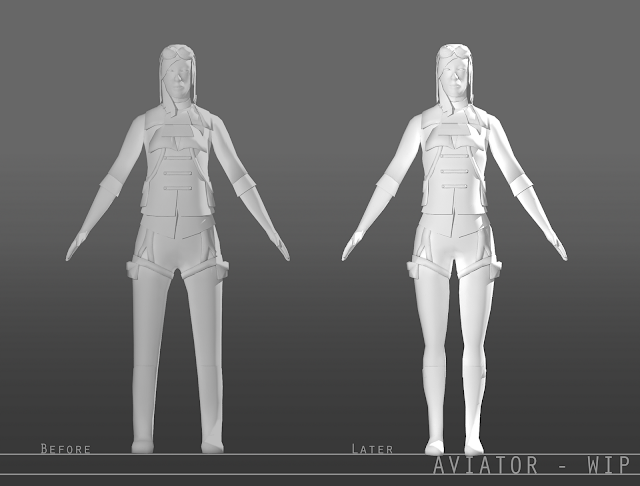 Ive been revisiting areas and this was a real headache for a while because i had laid out the uv's and even packed it nicely only to realise the model was crap and generic so was initially trying to edit this with completely destroying the uv's. I knew it was slightly generic but I guess I left it too late and when it was pointed out by M.Powell this morning that the model was basically crap because it was so flat and generic, I knew it was almost shocked by my stupidity why I hadn't already fixed these issues because if this was a drawing I know for a fact that i would not have made this mistake.The basic problem was that there was little to no form in the figure and you could really tell this in the front vie, so I  tried to think why I made this mistake.
I think it was because I initially wanted to try sculpting this in an external program so I was in a laid back attitude and just made basic shapes thinking that I'll fix it at some point when I start sculpting in zbrush but later on as I did more and more of it, i began to define certain areas much more. I also should have used reference from the beginning because the concept was fairly loose. This sort of had a knock on effect and made me think Ill fix it later. The other major issue  which I also think is the most common one is that worrying / getting carried away with topology, although it is very important to have the correct topology, I think it is also very important to understand the point of doing these specific topologies. The topology should serve as a vessel to maintain form under deformation ( i think anyway) so I guess one of my primary mistakes was that I was too concerned over laying good topology than establishing forms more completely. So basically back to what Mike said, wire frame looks good but shows no character.
I am trying as much as I can to fix some areas to get some of the general curves going and define some of the forms but learned a lot from this!
Posted by Sarankan at 23:39 2 comments: 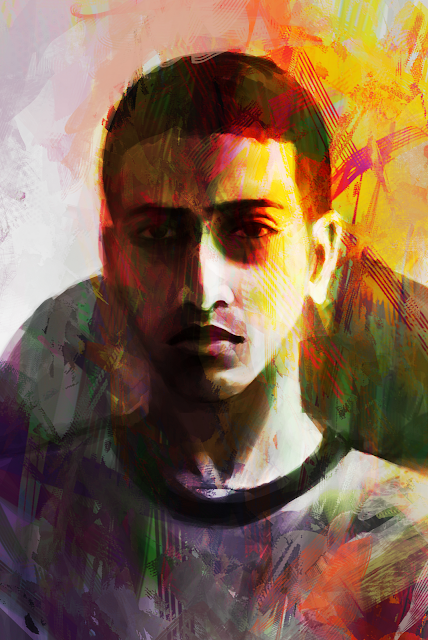 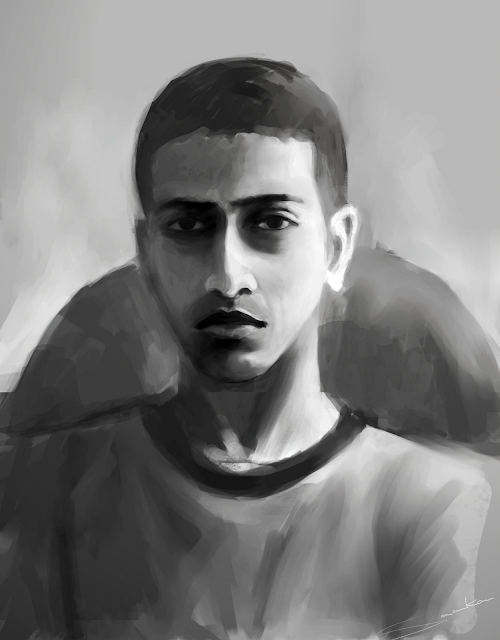 Self-portrait sketch i did ,... sort of simultaneously..got tired of doing the eyes from looking at the mirror and then screen.the light on my right was from the window.
Posted by Sarankan at 14:05 2 comments: 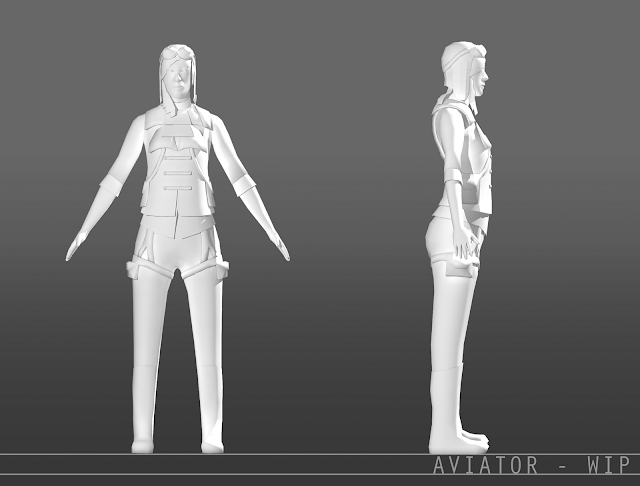 Started to fix and redo an aviator that I started a while back but now I sort of know how to approach it better (i think) also my first lady-character:) will post wire frame in while its taking ages... 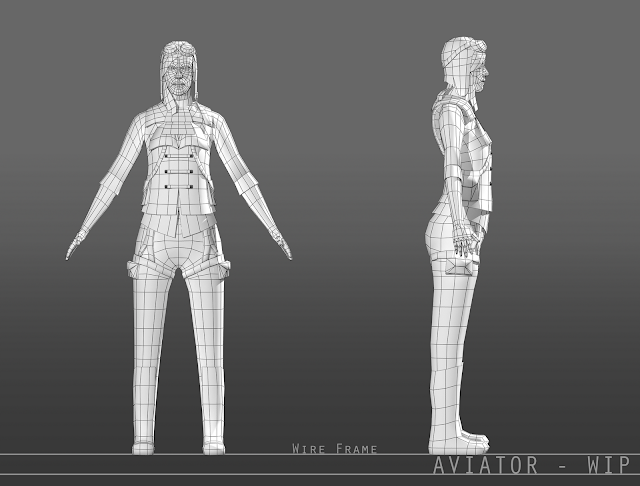 Ok I know certain areas are slightly more refined than other areas cause I initially wanted to add details in zbruh but I might re-consider. I know certain areas look kinda generic and I will do something about it.
( I hope) but most of all, I don't want to drag this model out for too long.
Posted by Sarankan at 11:41 3 comments: