The summer holidays is always a challenging time to do work, this is mostly due to the fact that it is entirely up to you when it comes to spending time and it’s very easy to digress.
Personally this year’s summer holiday has been the best! Its great to look back because I didn’t waste time, so just to quickly recap; last academic year was very much a learning year as it wasn’t really about doing polished work but being able to understand the workflows by pestering 3rd and 2nd years constantly / doing research on whatever i need to know to get the work done. It was also important to learn various tool sets, develop good work ethics (very important) and have an idea of what’s current in the industry. By the end of the academic year I had definitely learnt and attempted various techniques and made sure I was as ambitious as possible for the summer.
The first part of summer I mostly did a lot of 2d work with charcoal and practiced some of the techniques i learnt in A level and revisited some of the things he advised me that I should practice, his name was also Chris:/  I also tried to expand on what i learnt in foundation on ways to produce work quickly and tried these methods which were pretty fun. The next step was to attempt a full character as i haven’t done one since the gladiator and decided to make some sort of road side worker. From then I just carried on practicing topology and mostly just attempting various faces and character work and during the daytime (morning up till midday) I practiced or did some sort of 2d, which were anything from a speed paint to  sketches that sort of dragged on for a few days. The tempo was pretty good and tried to be as consistent as I can and this sort of carried on all the way throughout the summer. To jump ahead in my later work I was able to get much more of that ‘likeness’ in my later models and be able to get to a finished stage much more quickly.
Now like many, I am faced with a difficult decision on what to specialise and so far I’m leaning towards character artist as I think that’s something I have a genuine interest and have passion to excel to produce work that will eventually be industry standard ( i hope!) environments on the hand is something I haven’t done many of so during the first semester I definitely want to try and make some sort of environment to see if that’s something i’d consider and the number of jobs available in environments is very enticing. It was also pretty cool to see blogs of peers who definitely motivated me to keep practising. The eurogamer event was a fun finish to the summer as I not only got pretty good feedback on where im going wrong and how i can  improve but its also because I got to play Ninja Gaiden 3, Batman Arkham city and Guildwars:) !!
The tutors and especially M.Powell has been a  help during the summer, who from time to time reminded me and kept me going in the right direction and made sure I didn’t fall in too deeply in the sort of game art student manholes.  It was also great to pop in to labs from time to time and discuss issues on work and also where things are headed. I'm not trying to suck up....that's just what happened...
update: This year I want to a lot more independent and be creative with the personal projects and treat this like a job and hobby. It was pretty clear after foundation that how self directed you must be to get things done and first year it was very obvious and second year I will have to be contsantly motivated and self driven. I think I am leaning slightly towards charcetrart as this was something I practiced heavily during summer and I want to continue to excel in this area but at the same time I dont want to be closed off towards other areas. I want to do various projects throughout the year to contiue experiementing and see if any other areas intrests me.


Concepting in its truest form is about solving visual problems. The words “concept art” is always an exciting topic among student; also what most of them want to achieve at the end of the 3 year game art course journey but like many I had a skewed view of what this job actually requires.
I have always been interested in digital art in general and this was most due to the versatility to produce anything you wanted with flawless accuracy. The more I browsed on websites such as cghub and conceptart.org the more I became inspired and at the same time I wanted to be part of this, but what I failed to understand was that all the artwork’s that I saw all had some sort of purpose/brief (well most of them) and this is more apparent now than prior to the course. After having read the Meerkat process and planning document and discussing this with M.Powell and fellow student it is even more “in your face” on how important it is to plan thing before hand to ensure that each work is done with an almost rehearsed mind-set. “ like you know exactly how to approach it technically and creatively and  how long are you supposed to spend on it” if I could somehow train myself to do this I think everything will become a lot more straightforward.
I watched an interview video from feng Zhu who I think is a pretty good example when it comes to work ethic, mostly because without no doubt he loves his job but he definitely treats it as a job and one of the things he always mentions is long everything takes and things like that are valuable in knowing how quick and fast you need to work and when you have that production mind-set, things that I used to think that was important like “style of painting” and other things like that become more and more erroneous. The sketches usually constrict to a brief/purpose/some sort of reason. This way of thinking definitely increases productivity; the visit from graduate now working as a concept artist definitely cleared the air and set things in stone.
The workshop was a good insight on how quickly you must work and how much you’re expected to get done. We started the day with some character work in which we blocked in a quick thumbnail sketch as soon as we can which we then revisited and picked a thumbnail that we liked to expand on it. The next task was to produce and environment concept where we painted an alley scene and what was more interesting was watching Mitch do it. This was when he literally grabbed a ton of images from google to build a visual library then used these as a base then painted over it.
To sum up concepting without no doubt requires some sort of planning to make sure  you know what you want to achieve at the end of each painting.
Posted by Sarankan at 14:28 No comments: 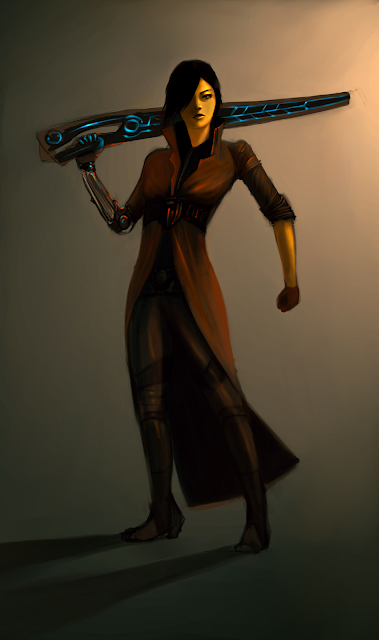 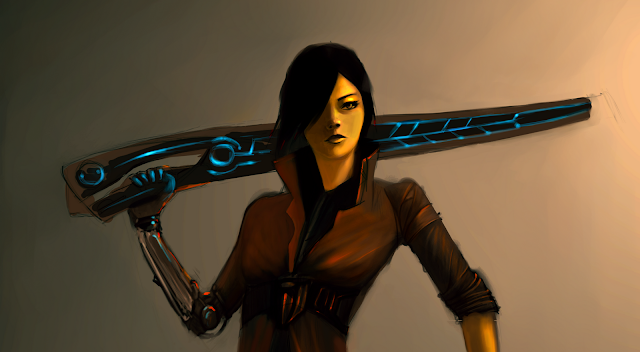 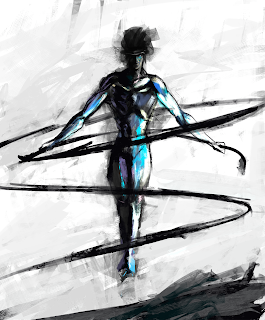 Posted by Sarankan at 09:59 No comments: